Eventually, the hand-knotted carpets and rugs are seen to be made all over the world. The quintessential style of carpets, hand knotted was originally seen in Asiatic locations. These highly prized specimens of floor coverings were later imitated by the European nations later. Such carpets are constructed by clipping the lengths of yarn. The clipped ends of the yarn form the pile of the carpet that are tied in rows crossways to warps. Each row of knots is separated by multiple picks of wefts, fixed in as interchanging series of plain weave.

There are various types of hand knotting techniques. They are as follows:

Famous hand knotted Persian, Turkish specimens of carpets and rugs have been fascinating the world since centuries. Till today, there is a huge demand of such beauties in the Western markets. Materials such as cotton, silk, wool, and jute have also been used to knot such handmade marvels.

What is handmade carpet?

"A Floor Covering which is made completely by human hands by Handknotting, Handtufting or Handweaving, in which handspun Yarn of natural fibers (most commonly wool or silk) is used, , with individual character and design."

Hand-made carpets are traditionally more expensive than those made by machines. Though there are several carpet-making methods, including braiding, hand tying (or hand knotting), hooking, shearing and tufting, the most common of these are braiding and hand knotting. 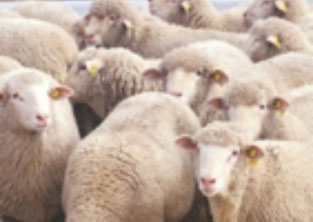 Wool is either imported or is bought from nearby markets and is carefully sorted to pick out unwanted particles. Wool often carries dust, grease which is removed by washing it thoroughly and is then sun dried for two-three days.

The Tibetan wool has a strong good fibre length is imported in scoured form, good lustre and a high resilient value. The New Zealand wool is of 36 micron, 100 mm barb length and is identified as type 128. British wool meeting regulatory standards have also started being available in the market. 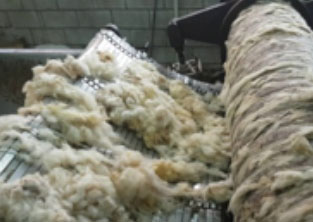 It is the process of washing of Wool fibre. Wool fibre has lot of dust, dirt and the sticky oily material called Suint. Suint is the wax like material which comes out from sweat glands of Sheep. The fibre has to be washed with caustic to remove suint. 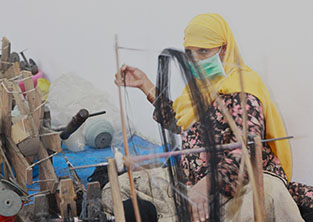 Spinning involves two steps Carding and Spinning- Carding is sometimes done by hand with help of carding brush or on carding rollers run by hand. The carded wool is spun into yarn by using a charkha or a spinning wheel. The thickness of the yarn depends on the quality of the carpet and generally a 3 ply yarn is used. 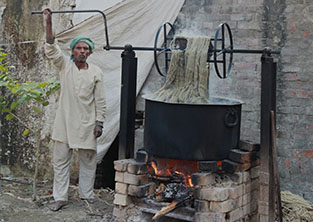 The traditional pot dyeing method has been largely replaced by machine dyeing in closed Chambers. Dyes containing harmful substances such as AZO are banned and dye-stuffs from renowned international manufacturers are used. These dyes have a high degree of fastness. Depending on the weather, the dyed yarn has to be dried in the sunlight for one to three days. Pot dyeing and vegetable (natural) dyeing are still being used by some manufacturers.. 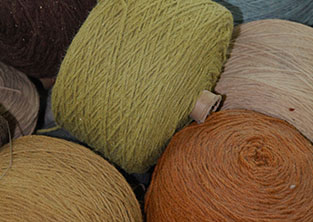 When speaking about patterns and carpet manufacturing these are often divided into three categories; curvilinear, geometric and figural patterns. There are many frequent named patterns, we will mention a few of the most common ones.
These patterns can decorate a small part of a carpet or be used in an overall motif.

From the pattern on a carpet it is possible to see what style and also which origin the carpet has. The size and colours that are used also contributes to the answer of the carpets origin.
The pattern is the most obvious and perhaps the most important characteristic in a carpet. Around the cities and in the workshops, much time is emphasized on developing and refining the old traditional patterns which are all first drawn by hand on paper. 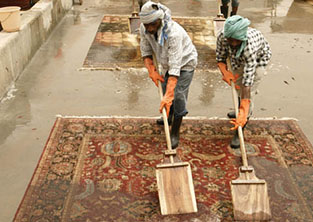 It is done as the first wash to clean the carpet and for removal of dust and dirt or any stains on the carpet. 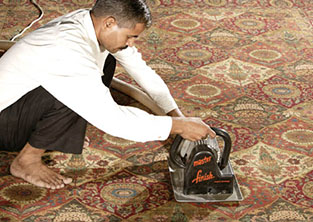 After carpet is washed the piles are cut to level them to same height. This is called Shearing. 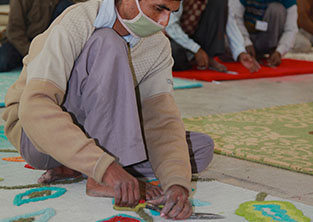 is the process of cutting the borders of the motif on the carpet which gives detailing to the motif. It is also done by decreasing the pile height of the piles other than that of motif. This way the motif seems to like protrude out of the background and gives a good look to the carpet. The embossed motif is sometimes of different fibers also. 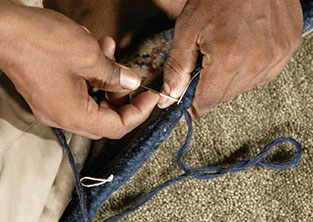 The sides of the carpet is bound by a separate thread which is a thick thread and often doubled. This gives additional strength to the carpet. 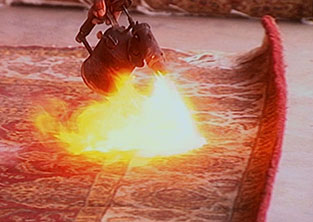 it is the process of burning the protruding fibres on the backside of the carpets. This gives a sharp and neat finish to the carpet. 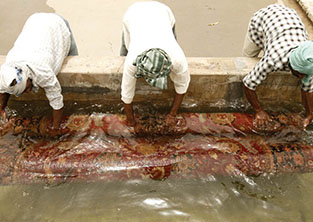 The carpet is washed for the final time. Final washing provides it the required luster. 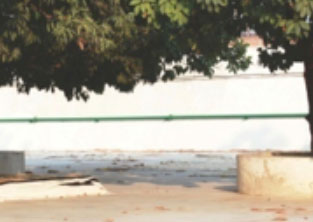 In traditional setup dyeing is done under the sun, but many manufacturers have drying machine which can control the tempreature and moisture of the carpet. 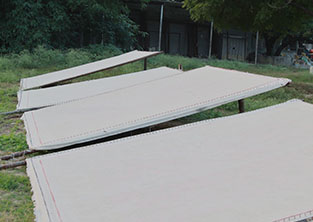 Stretching is done to make the sides straight otherwise the carpet has some curved edges . 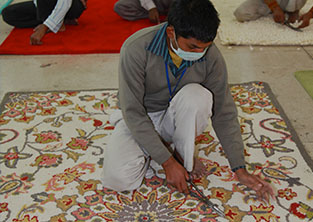 This is the finishing step in the manufacturing of carpet. The clipping is done with minute detailing. 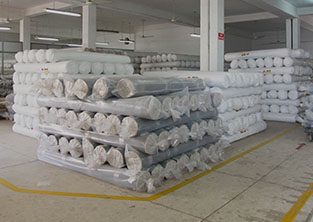 After the carpet is finished, it is packed and bailed for exports.

the parts of a rug 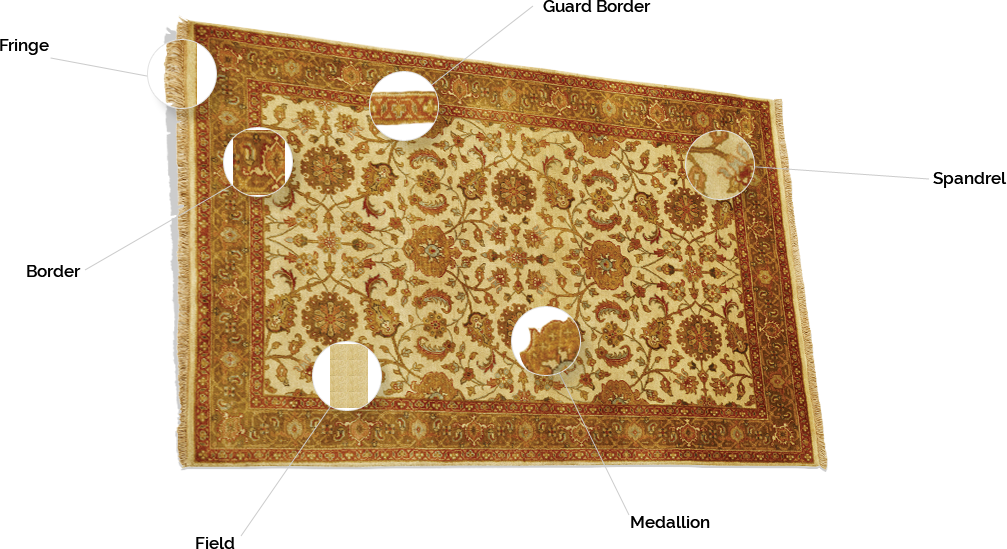 The Fundamentals of Rug Making

Although some of the special techniques involved in weaving an Oriental rug may vary from country to country and even from one region to another, the principles of rug-making - from dyeing the yarn to shearing the finished piece - are virtually the same throughout the world and have changed very little over the centuries. Still, a basic understanding of an Oriental rug's construction will be invaluable to you when selecting an Oriental rug.

By and large, most Oriental rugs feature a wool pile, mainly derived from sheep, whose quality depends on factors such as the animal's breed and diet, local climate, and shearing season. After shearing, the wool is washed, carded (i.e., a teasing process that straightens the fibers), and then hand - or machine - spun into yarn. Next, the yarn is dyed in an attractive range of colors and then dried slowly in the sun.

A detailed illustration of the carpet design, most commonly called a cartoon, guides the weavers throughout the entire rug-making process. The design is rendered on graph paper to scale.

Through the ages, looms have remained relatively unchanged. While the most primitive is the nomadic or horizontal loom, the type most generally used today consists of two vertical beams of either wood or metal and two similarly made horizontal beams. The distance between the vertical beams determines the rug's width. Warp threads, usually cotton, are strung between the horizontal beams at a consistent tension. The thickness of the warp threads and the closeness at which they are strung are two of the elements that will determine the fineness of the weave (i.e., knot density) of the carpet that is ultimately woven.

It is difficult to make out the difference between a Machine made and a Handmade carpet. But if you know the key points and have an inspective eye then you can separate the two.
More clarity on the differences can be explained in terms of:

Machine-made rugs and carpets are not woven by hand but are loomed by a computer generated system or apparatus. There are no knots in machine-made rugs. Whereas in a hand-made rug, each knot is hand knotted and tied. In machine-made carpets, threads are glued or looped onto a hot latex (plastic) backing which cools and hardens. They show a complete and rigid uniformity in manufacture which transforms into a static design. Machine-made rugs generally lack spontaneity and human touch.

In power loomed or machine-made rugs the stitching on the back is very consistent. They have extremely regular knots and even structure remains identical in all parts of the carpet. On the other hand, in hand-knotted rugs the stitching varies slightly due to different tensions on the wool as people hand-tie the knots. Most hand-made rugs and carpets are covered with a cotton or canvas backing.

You can also differentiate a machine-made and hand-made rug simply by touching. If you place one finger on the front of a machine-made rug and your thumb on the back and pinch tightly, the rug will compress greatly and you will feel a sensation going right through one side to the other side. On the other hand, while pinching hand-made rugs you will feel much more body and substance.

the parts of a rug 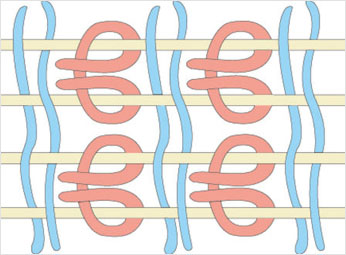 The symmetrical knot, also known as the Turkish knot or the Ghiordes knot from its origin in Turkey where it was originally used. Sometimes this knot also goes by the name of turkbaff. In the symmetrical knot the yarn is placed (marked with red in the illustration ) in a loop around each and one of the two warps (light yellow ). Between every row of knots a weft is placed (coloured with blue ) in one or many rows. The symmetrical knot provides a stronger consistency to the carpet and is often used for thicker carpets. This knot is being used in Turkey, the Caucasian area and in the western parts of Iran and by Turkish and Kurdish tribes. It is also used in some European carpets. 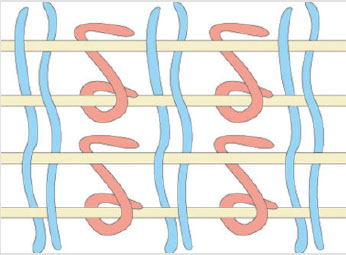 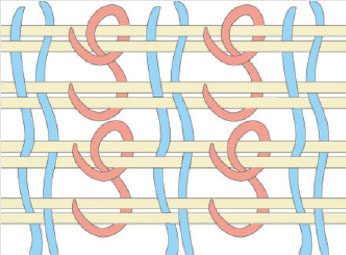 The Tibetan knot has a completely different structure than the other knots. This knot is made by using a temporary rod (brown in the illustration) along the width of the carpet, which is placed in front of the warp (light yellow) . The long yarn (red) is then placed around two warp threads (light yellow) and then around the rod. When the weaver is done with the entire row of knots the loops around the rod are cut to create the knot. 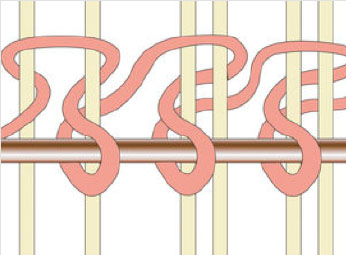 A Jufti knot means that the knot (marked with red) is placed over four, instead of two, warp threads (light yellow) . The weft (blue) is placed in one or more rows. When weaving a carpet with this knot, the work goes on faster, but at the expense of the knot density. The carpets also tend to be less durable and the surface can sometimes look loose and shaggy. Of course the carpet is cheaper but also much worse. The knot can be both symmetrical and asymmetrical. The Jufti knot can be found in Khorasan carpets from Iran.

China, India and Pakistan each use their own unique system for grading rug quality by knot count. Handmade rugs from any country (except China) are often graded by Knots Per Square Inch, or KPSI - an impotant measure of a hand knotted rug's quality, value and even durability. A rug with a higher knot count will typically possess the attributes of greater intricacy and clarity of design, and is usually more expensive than a rug with a lower knot count, but with similar design features etc.

KPSI Corresponds to the Pile Density of Wool